NO LIMITS CHALLENGE – True stories of a Race across Italy 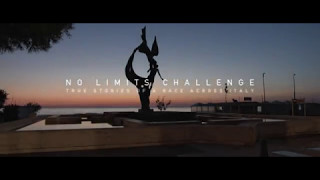 NO LIMITS CHALLENGE - True stories of a Race across Italy

Tell something about you - Raccontaci qualcosa di te

I am an architect, co-founder of Fablab Venezia innovation lab, alpinist and member of the CAI (Italian Alpine Club), “Gransi” climbing rock group. I am a cycle-wanderer member of Scavezzon Cycling Team, part of the 2019-2022 Italian Randonnée Team and I belong to the Tigers Bicycle Punk Club.

Recently I decided to open a blog, called Iter Cycling Blog itercyclingblog.com, where I will summon up my cycling experiences. I want it to be a platform to gather friends, partner enterprises, enthusiasts, to exchange thoughts and create a network. The aim is to create a simple and honest container of quality contents, talking about a new way of cycling which combines latest technology and a “primitive” spirit.

In the ‘90 I started to attend the Scavezzon bike shop and now, after a quarter of century, I came back dreaming to explore new horizons, and asking them (and you) to accompany me as they did in the past.

For twenty years I have been devoted to alpinism, climbing the hardest walls in the Dolomites, and in the Alps in general, doing also an experience in the Andes almost reaching 6500mt. In the last few years I have been starting to follow the “two wheels route”, in an eclectic and multifaceted way, trying to do everything with just one bike (from 2015 to 2019 Cannondale Super X Black Ink, now Canyon Grail)

Staying on a bike and going to the mountain are kept together by one “fil rouge” a sort of creative and adventurous feeling, that pushes me to test myself with new disciplines like, gravel, randonnée and ultracycling. My goal is “staying on the pedals”, that means mainly “staying in the mountains” for me, because I believe that cycling among those landscapes takes a different meaning: the effort becomes almost a pleasure, the elements get stronger and you can finally smell the perfumes surrounding you

I am proposing myself as the average client, or better the typical one, with limited economic and time resources, a lot of passion, a scarce cycling background, who finds himself collecting kwowledge directly on the bike, learning by making mistakes,

The main directive is to support a sound and honest sports culture which starts from the respect for oneself, for nature and for other cycling mates-competitors. A 2.0 way of cycling, that uses electronic, gps, traversing secondary roads and ancient villages, thus creating a new marriage between technology and history, that only those who philosophize on bike can understand.

This is a sector in rapid and constant evolution and its future is yet to be written. I believe that the feedback of this new “average” client can able to revolutionize companies and retailers’ strategies.

In the near future I would like to continue cycling in the mountains and working on long distances, taking part to Randonnee and Ultracycling races to keep testing myself. Super Randonnee delle Dolomiti and Randolomitics have been two of the most interesting races I have done. In a couple of days I have crossed between 14 and 18 Dolomitic passes, basically all the main ones.

The most important experiences have surely been the Randonnee Alpi 4000(1500km, D+20.000 done in 137 hours) together with the Three Peaks Bike Race, a 2000+ km race from Wien to Barcelona organized by Adeventure Bike Racing. Being part of the 2019 Italian Randonnee Team also allowed me to partecipate in the Paris-Brest-Paris 2019 (held every four years), but I dream of a longer race

I’m planning to take part to the Five Parks Bike Race in the USA, September next year.

With the right support even the “average client” can undertake the mental and physical route through this kind of adventures.

I would like be useful as an “average client” and not as a tester or testimonial because I think that an amateur goes through very different dynamics, compared to semiprofessional or experts. All the experience I did, and will do, can be a value for the new consumers willing to experiment and grow in this 2.0 way of cycling, a non-professional and sometimes off-road one. I think that randonnee, gravel, ciclotourism, are the future of this sector. ... See MoreSee Less